I previously wrote that Erin gave me a gift cert for the Shenandoah Brewing Co. over in Alexandria. We went there a couple of weekends ago to start The Making of the Beer.

I was going to take photos of the place and stuff, but the battery on the small digicam was completely dead. So no dice there.

Having never even tried to make my own beer before, I found the process to be quite stressful overall. It starts off tamely with you picking the type of beer you want to make. Then, they give you a recipe, and you go off to collect your grains and grind ’em all up into a big cheesecloth sack. Then you go to the big fuckin’ vat to steep your grains.

After all that stressing over the vat, they drain it into a barrel and measure the specific gravity (or something) to figure out what’s happened. Apparently, I boiled our batch a little too vigorously, and we lost more water volume than expected. That means lower yield (fewer bottles), but higher alcohol content.

After adding the yeast, we settled up and left. We’re scheduled to go back for the bottling and labeling session on March 8th.

Speaking of labels, I’ve been toiling over my custom shit for a while now. The only judge for my few designs (in their various states of completeness) is, of course, Erin.

Here are a few that didn’t make the cut (clicky):

And here’s the winner: 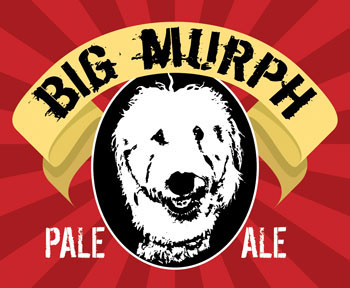 One thought on “Our Beer, Our Label”